Musician Daniel Young is dreaming of using his SACE to follow a career composing and scoring for movies. 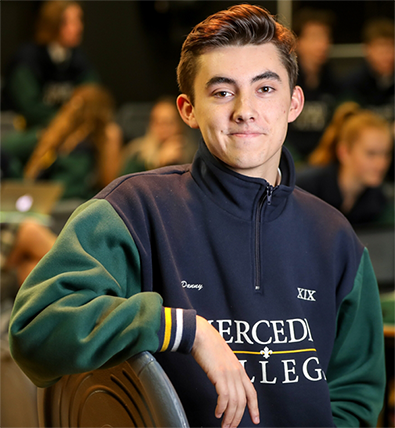 Mercedes College student Daniel Young has surrendered his favourite subject to complete his Year 12 studies – but he has no regrets.

“I gave up music this year because I had too many credits from last year and the year before, but I can blend music into a lot of my Year 12 subjects,” he says. “Drama and creative arts are probably the favourites.”

Coming from a musical family (his mum is an ex-music teacher who now runs her own choir and his dad an ex-band member and avid guitar player), it’s little wonder Daniel has grown up with his own passion for music, a passion that has been allowed to grow and bloom thanks to the flexibility of the SACE.

“I did my VET Certificate II in Music Industry in Year 10 and my Cert III in Year 11,” he says. “That was just fantastic. With the Cert III, I went into the studio twice a week to work on the desk, learning how to use it all and looking at industry connections. It was a wonderful resource for me and gave me SACE credits.”

Daniel also completed his music performance solo and Year 12 music studies in Year 11, an experience he admits was a challenge but one that has since proven its worth.

“It took some time to get acquainted with how I needed to organise myself but I had the support of my teachers,” he says. “There was quite a bit of work to do but I was really happy I made that choice. Because just taking the stress off of being in Year 12, it makes it that much easier.

“I would definitely encourage Year 11 students to pick up Year 12 subjects and find VET courses you’re interested in. Now I’m feeling great. I can focus on making the projects I’m doing the best I can.”

Daniel’s next project after graduating is to pursue a career in composing and scoring for movies.

“My music teacher’s husband works as a sound engineer for the ABC and he invited me to come to work experience after finding out I had done the VET courses,” he says. “At the ABC there was a freelance sound engineer from Hollywood who took me for a session. We looked at some of the films coming out and he showed me how he layered it all.

“That experience wouldn’t have come without VET. Seeing that come to fruition and then watching the movie in the cinema, I just knew that’s what I wanted to do. It’s a big dream, it’s ambitious – and it’s what I see myself doing.”