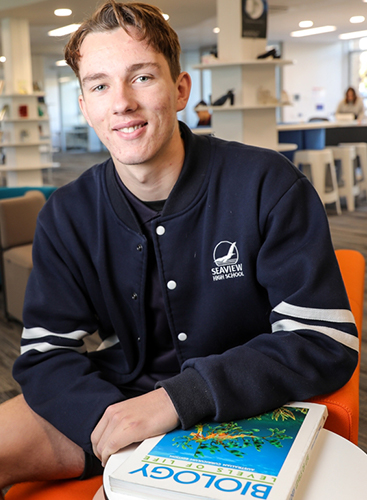 A Year 12 student at Seaview High School and a small forward for South Adelaide Basketball Club, Levi is studying biology, health and physical exercise after completing his SACE in Year 11 combined with a Certificate III in Fitness at Unley High School.

“It was pretty hectic but the flexibility to leave this school and go to another school I thought was pretty cool,” Levi says. “The teachers were very helpful. It was pretty tiring and a lot of work but I’m definitely happy I did that because it’s made everything a lot easier. I only have to do three subjects to get my ATAR and I already have my SACE.”

Subjects covered in the Cert III in Fitness also helped Levi when it came to completing his Research Project – on how to dunk a basketball – as part of his SACE studies.

“We learned a lot about weights and exercise physiology which I incorporated into my research project,” he says. “This year I’m doing a mini research project in which we can develop any question we want. I’ve been watching a lot of podcasts recently on the use of certain substances as medical treatments so I’m doing my health assignment on that.”

The result of all this hard work, Levi hopes, will be a future in fitness.

“I’m going for the absolute best I can and once I see my ATAR I’ll work out which university pathway to go down,” he says. “I’m hoping for an ATAR of around an 80 or above. I’ve set everything up so I can be a personal trainer but I’m keeping my options open until I get my ATAR, which is when my decision will be a bit more educated as to what I’ll be able to do.”

As well as health and sport, Levi sees his mum’s role as a landlord as the inspiration for another possible career option.

“I would like to look at owning businesses or houses,” he says. “My mum owns a second house which she rents out and I’ve always been pretty fascinated by that. I’ve been looking at a lot of uni courses – health but also marketing because of my mum.”

But basketball is never far from Levi’s heart. “I would like to go as far as I can with basketball,” he says. “That would be really cool. But I think education is important to have as a back-up.”