A refugee who left Africa for a new life in Adelaide is celebrating completing her SACE. 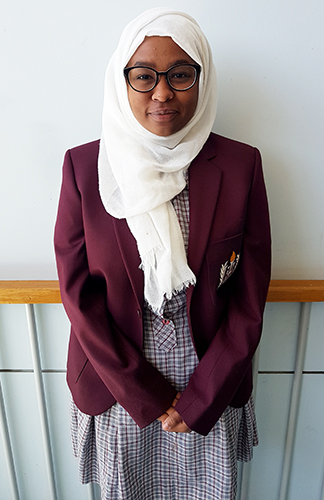 Sumaya Keyse Abdinoor was born in a refugee camp in Kenya after her family had escaped the Somalian civil war. When she arrived in South Australia with her family in 2009 she could not speak English.

But now SACE graduate Sumaya is looking forward to achieving her ultimate goal of helping others – and is planning to study either Pharmacy or Psychology at University.

“It was a culture shock arriving in Australia, I didn’t speak English which made it difficult to make friends,” Sumaya, 17, said.

“During my time at primary school I was very shy and I kept to myself. But over time I learned to speak better English and things started to improve.

“When I went to Findon High School in Year 8 it was a chance to reinvent myself and I just threw myself into lots of curricular and extra-curricular activities. I wanted to push myself academically and I set myself a goal of studying Pharmacy at university.”

“The things I enjoyed about the SACE were the Personal Learning Plan and the Research Project. The PLP was good because it allowed me to explore different career pathways before I decided what SACE subjects to take.

“The research skills I learned doing the Research Project really helped me with other subjects such as Biology, where we had a research assignment to complete. It was also important for me to study Somali because I wanted to stay close to my cultural roots.”

During years 11 and 12, Sumaya became a strong advocate for student voice and was elected one of four school prefects. Sumaya was also the award recipient of the ADF Long Tan Award for 2018.

“Sumaya has been an enthusiastic student throughout her time at Findon High School and has always looked for opportunities to develop herself both in and outside of the classroom.

“Having arrived as a refugee into a foreign country with very little support, Sumaya has taken full advantage of the many offerings that are presented throughout a school community.

“Her work as a school Prefect has seen her become a strong ambassador for our school, as well as a role model for younger students.”