SACE graduate January Ntakirutimana is planning a career in medicine and a potential return to his former home in Africa to help his former compatriots. 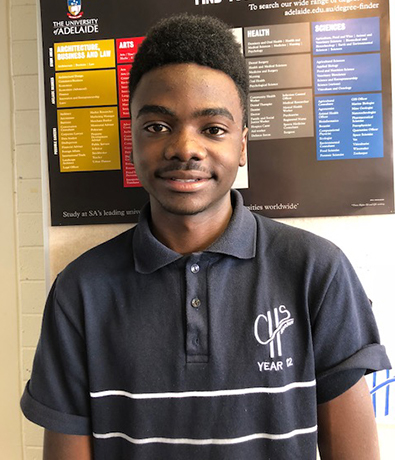 January has already sat his Undergraduate Medicine and Health Sciences Admission Test (UMAT) and hopes to study Medicine at the University of Adelaide in 2020, or a Bachelor of Paramedic Science degree.

“Medicine has always been a really strong focus for me, which is why I chose SACE subjects such as Biology and Physics. I really enjoy learning about the human body,” January said.

“I arrived to Australia from Burundi in 2006 and it was a challenging time because it was a new country and it was so different to Burundi.

“I hope to one day in the future go back to my country and be in a position to pass my knowledge on to help others. I would really love to one day create a vaccine that helps so many people.”

January’s Research Project explored the conflict between two tribes in Burundi, a conflict that resulted in his family fleeing Burundi.

“I found out so much about that conflict and I now have a greater understanding about why my parents do not enjoy action movies, it was such an interesting topic to explore.”

January’s advice to future students studying the SACE is to complete the Research Project in semester one and to keep up with the workload by being organised.

January’s SACE achievements have been praised by Craigmore High School.

“January has been very determined to use education to help him to develop both academically and socially,” Sally Cowgill, Year 12 teacher at Craigmore High School, said.